Here we are! Grand Rapid Falls! The last race of an exhausting season of the Tour! The crazy, fast and dangerous races of recent months have been exciting to follow, but this race is the most beautiful, the most prestigious. Whoever wins it will be crowned Tour Champion!

This season, the Champion crushed the competition and won all the events. But her challengers all want to take her place in this final stage!

3.2.1. Let's go! The race is on! But don't forget that these drivers have had some great moments all season long (relive them on our dedicated channel!) and the final victory may not be the goal of all of them! The sidelines of the track, failures and successes, their relationships with other runners will impact their performance.

Will the Champion win the race? What impression will these Pilots leave? Who will we see again on the Tour? Who won't finish the race? All these answers (and more) in our live stream!

Final Lap is a role-playing game for 2 or more players (although it is possible to play it alone). Based on Alex Roberts' game For the Queen, and therefore Descended from the Queen, it takes the form of a deck of cards, which we'll draw as the game progresses. They'll help us create our story.

In addition to the deck of cards, we don't need anything but our imagination. A game lasts between 30 minutes and 2 hours, depending on the number of cards we use.

The rules of the game are written on the "Instructions" cards, which are revealed and read at the beginning of the game, and which explain us how to play. 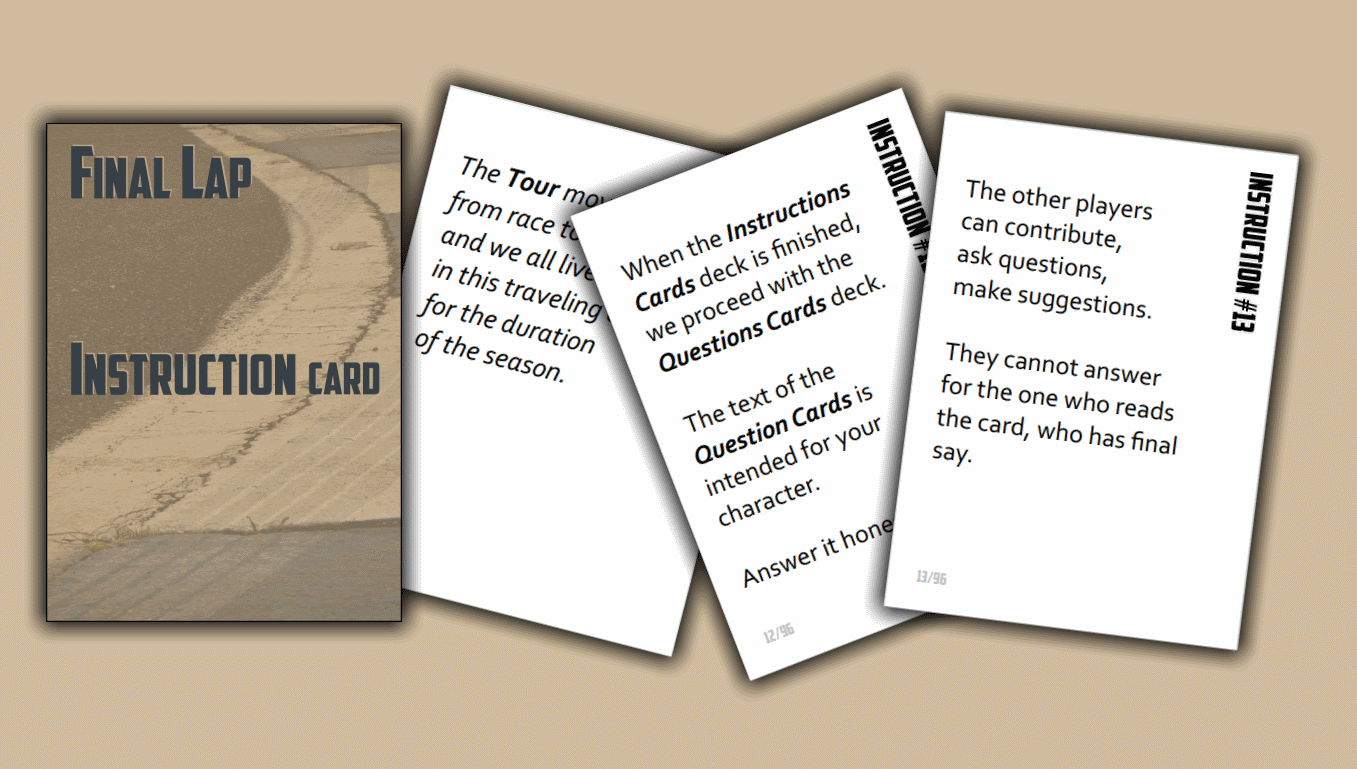 Final Lap explores the world of racing and competition. We play the role of drivers in the last race of the season. The race that will determine the overall winner of the season. The Champion won everything this season and is the favourite. But we are her challengers and have an opportunity to beat her in this final lap.

During the game, we will be narrating live scenes, in the middle of the race as we approach the final lap. But we will also tell flashbacks about our past and what happened in previous races, between races or even before we entered the Tour. We will explore the relationships between Pilots and with the Champion. 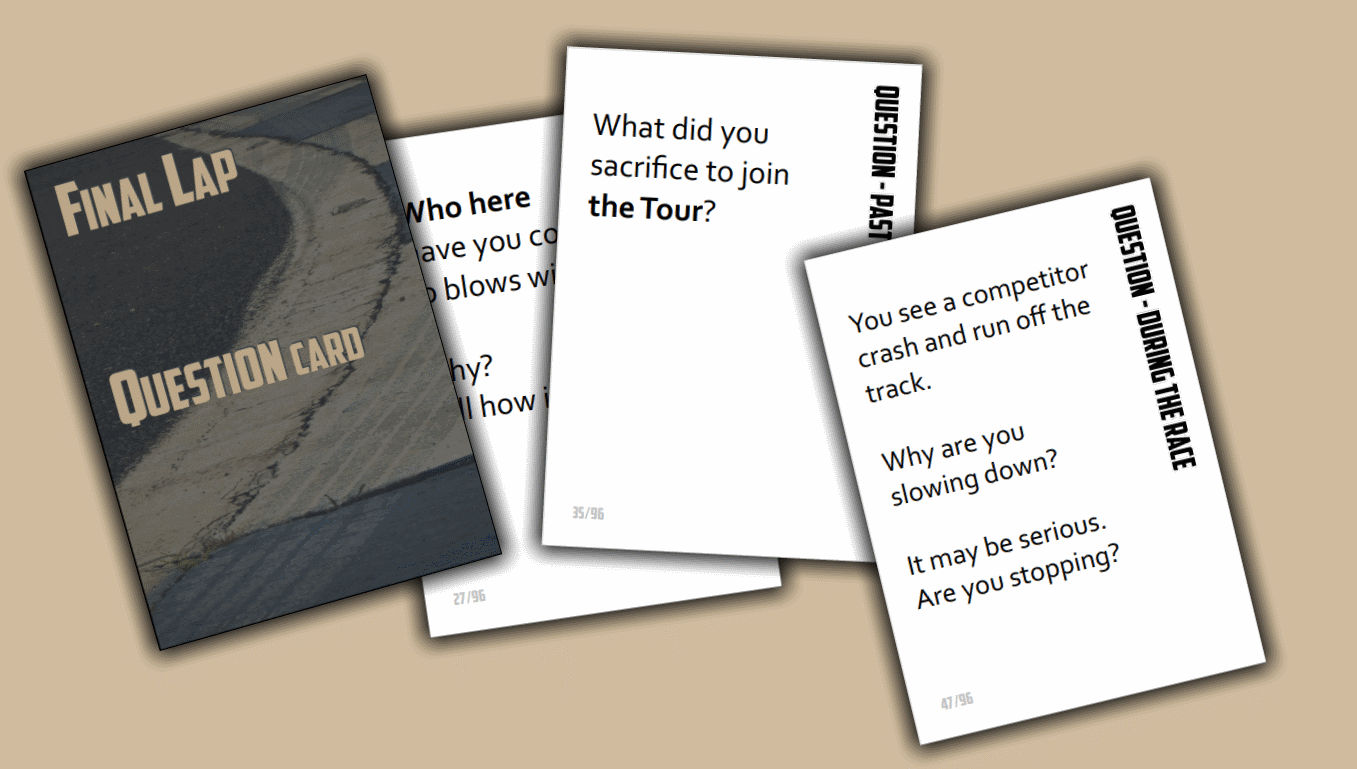 Final Lap is available in a light version on the For The Drama platform (see also here on itch.io). You can play online with a version that offers a single ending where the Champion is sure to win.  You can also use the platform to discover the game's questions and quickly try out the game. 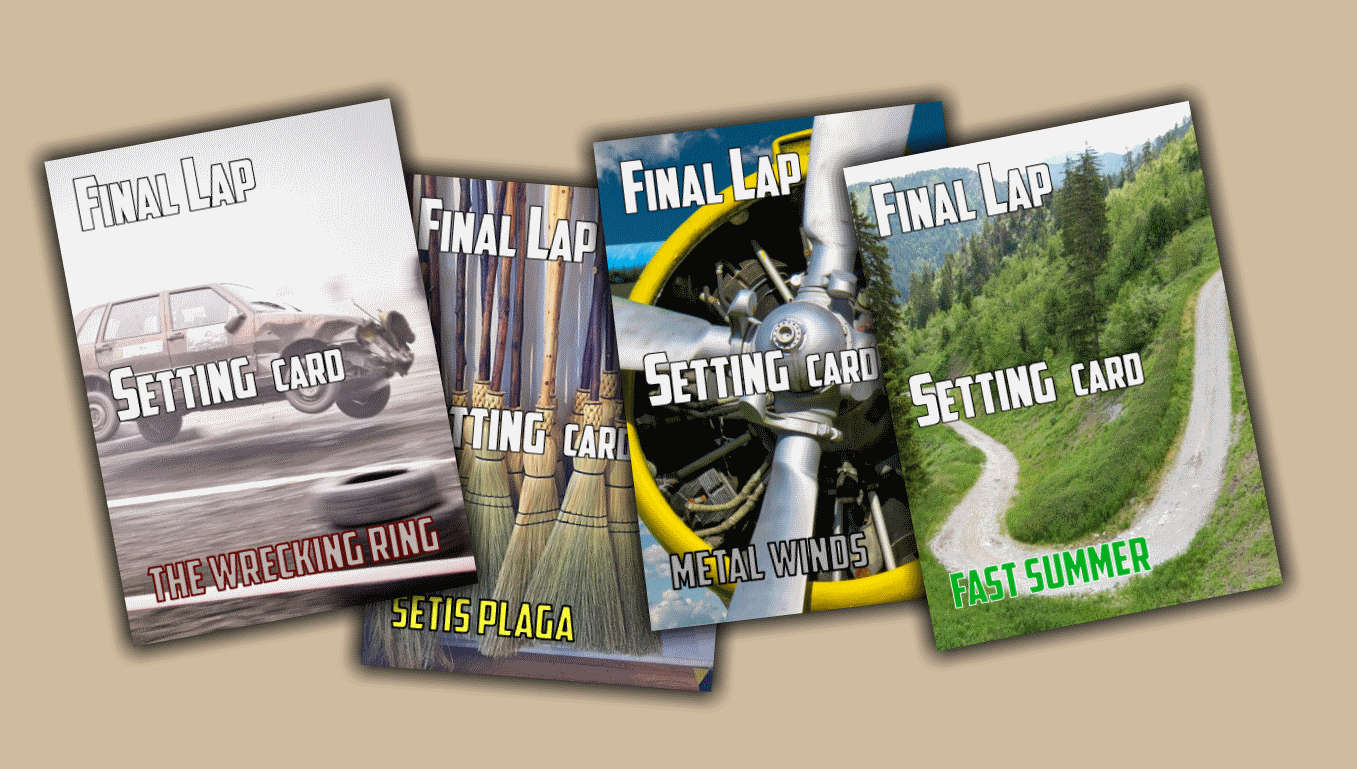 9 unique Champions are also available in the full game, each with their own card and style. It is also possible to use these Champion cards to quickly define your character. 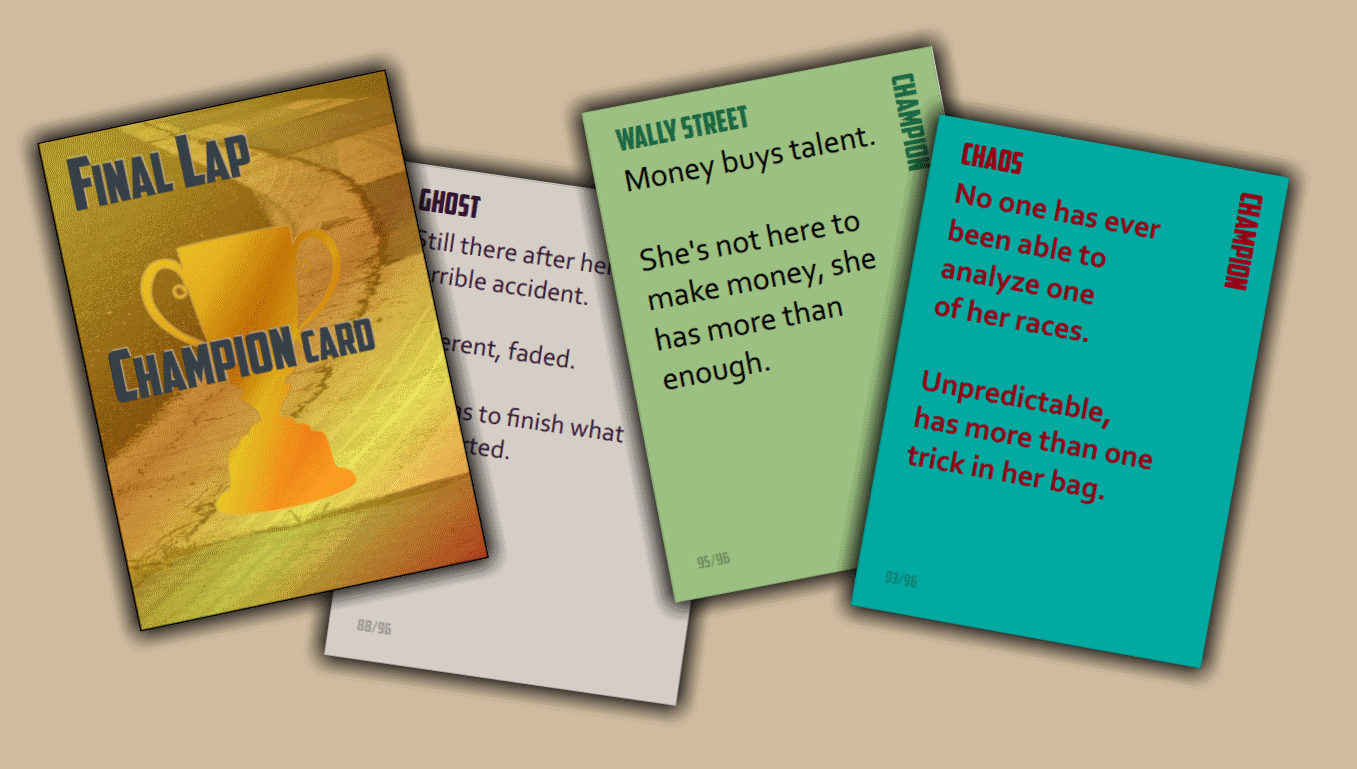 Final Lap is available in PDF format for free, in a Print'N'Play version. The cards are adapted to MTG cards sleeves for comfortable use.

I recommend that you print the Back pages in Black & White, and the Front pages in colour.

For a purchase of $3 or more, the PDF with the Settings and Champions illustrated and in color will be added to your library. I may also add in the future a PDF with the tuck box for your deck of cards, to print and cut yourself. Additional cards may also come in the future.

The text of the game Final Lap is available under CC-By-SA and Beerware license.

For the Queen™ is a trademark of Alex Roberts. The Descended From the Queen Logo is © Alex Roberts, and is used with permission.

In order to download this RPG you must purchase it at or above the minimum price of $3 USD. You will get access to the following files:

Support this RPG at or above a special price point to receive something exclusive.

If you're suffering financial hardship or marginalisation, or can't afford to buy this game at full price for any reason, feel free to pick up one of the free community copies - no questions asked.

Hello! I know some Descended from the Queen games have tables that let you play with a 52-card deck rather than printing custom cards – is that something you've considered with this game?

That's something I'll consider when updating this game (in the next few weeks). As I designed it, I wanted to focus on the "card" aspect and manipulation, the original gameplay of DFTQ.

While testing new games, I found also that a reference table is useful as I don't have to print, cut, sleeve cards.

Reply
Kalum from The Rolistes Podcast1 year ago(+2)

Really enjoyed playing this game with my wife for Valentines Day.

We're not fans of motorsports but I sold it to her as "Remember how much we enjoyed the movie Rush?".

...except our game turned more into a somewhat wacky Paris-Dakar.

It was perfect as a game with zero prep.

He'd really like to try it with more than two players.

I'm happy to see that it works even if you"re not into motorsports. I'm not really into it neither. What I'm interested in are the racers more than the race itself.

Also cool to know it works with two players. It's a configuration I've not tried yet.

Reply
Kalum from The Rolistes Podcast1 year ago(+1)

It was also among my recommendations to adapt Fast & Furious to TTRPG in an upcoming episode of The RPG Academy Film Studies (it will take me a while before I can edit it).

Now I need to work out how to leave a star rating here.

Interesting game. Totally narrative, you draw cards and answer to the question. At the end, with your group, you have to choose who is the favorite to win the race, then a last card will reveal if you win, or if the "NPC Champion" in the real winner, leaving all the players behind.

Thanks, I'll see to update the files in the weekend. 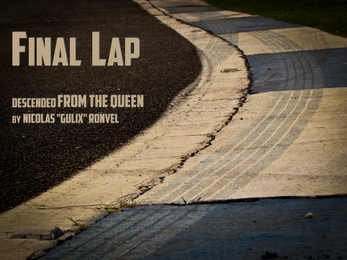