Get this SRD and 38 more for $25.00 USD
Games You Can MAKE
View bundle
Download NowName your own price

The content of this SRD has been heavily influenced by Wretched & Alone, written by Matt Sanders and Chris Bissette.

LEADS is a System Reference Document for games based on Nicolas Ronvel’s After the Accident, which introduced the LEADS system. LEADS stand for LEADS Enhances the Adventure by Driving Stories. There are also Leads to follow in the game. And Recursive Acronyms are fun.

These games are mostly solo journaling games. They generally require a standard deck of cards and something to record your game. Some games will change those premises.

This SRD is aimed at designers, writers and publishers who’d like to publish games using this system with their own themes and stories.

This SRD explore the mechanics and choices made for After the Accident, the first LEADS game, and how they can be used to create other stories.

SRDs are often documents presenting the core rules of a game. This isn’t the case here. LEADS is intended more to designers than to players.

This isn’t a generic system nonetheless. All LEADS games will provide full rules to play them. The rules will vary among them, and new ideas and mechanics could be introduced in those new games.

You are free to create LEADS games.

All I ask for is credit using the Attribution Text below.

The text of this SRD and the logos are available for use under the Creative Commons Attribution (CC-BY) license.

Wherever you put your copyright notice, add the following text:

This work is based on LEADS (found at http://gulix.itch.io/leads), a document by Nicolas Ronvel, and licensed for use under the Creative Commons Attribution 3.0 Unported license (http:// creativecommons.org/licenses/by/3.0/).

You are free to make use of the LEADS logo in your games and promotional materials etc. LEADS logo can be downloaded on this page on itch.io.

If you use the LEADS logo in your game, also add the following text:

The LEADS logo is a creation of Nicolas Ronvel, and is used with permission.

You are free to colour and resize the LEADS logo to suit your project, but the logo should not be materially altered in any other way. All the text should be the same size as the rest of your copyright section, and not redacted or obscured in any way. If you’re publishing electronically you can make “Creative Commons Attribution 3.0 Unported license” a link to http://creativecommons.org/licenses/by/3.0/ and “LEADS” a link to http://gulix.itch. io/leads instead of printing the URLs separately.

You can’t imply that Nicolas Ronvel is linked to your game unless previous agreement. You are the author of your game. In the same way, I, as the author of this SRD, cannot claim any authorship on your game.

You may not use any material from After the Accident that is not included in this SRD, including but not limited to specific prompts and artwork. You must create your own original material using this SRD as a base.

You can’t use the SRD to make anything that would be prejudicial to Nicolas Ronvel’s honour or reputation.

Fascists, racists, homophobes, transphobes, and other bigots are expressly forbidden from making any content using the LEADS system. If you wonder whether this includes you, it does.

What makes a LEADS game?

A LEADS game provides a list of prompts accessed by drawing cards. Each card is a prompt, a question, a scene to play.

Those prompts can be questions, scenes descriptions, drawings or anything that will spark the imagination.

In a LEADS game, the game starts by assembling a Story deck. Following the rules, the player sort the cards by "Act". Then they draw randomly from each of them a number of cards defined by the rules. All sub-decks of cards are assembled together to form the Story Deck.

As a designer, you can also forego the Acts structure, and build your game around themes. Each theme will bring a number of prompts to your story deck, and all the prompts will be randomly shuffled.

The first games with the LEADS system are solo journaling games. The story is recorded by the player as the character would do it. That character is facing events alone, and the player is also playing alone.

This isn’t a set-in-stone rule. Break it at will if it fits your game design.

Leads changing the course of the story

The core mechanics of a LEADS game are the Leads cards.

Words to be inspired by

A Lead is just a word (or an expression) accompanying a prompt. Not every prompt has a Lead : 25% of prompts with Leads is a standard ratio. A prompt with Leads has generally multiple Leads (3 a good number).

When answering to/playing a prompt, the player can choose one of the Leads to be the main element of their answer. This is called “Following a Lead”.

Using a Lead can be mandatory or not. It can be a simple word or a full answer. But the core idea is to guide the player’s answers.

Following a Lead adds a new prompt into the game. Each Lead is related to a new prompt (or multiple ones, randomly chosen). This prompt introduces a new theme into the story, matching the followed Lead.

In order to introduce the new prompt into the Story Deck, there has to be some deck handling.

The newly added prompt is matched to an unused card. A series of cards are kept to this use.

The player draw a number of cards from the deck (like, the next five cards). The new card is added to these cards. Those cards are shuffled and then put back into the Story Deck.

The handling rules should remain simple, but you can play with them in order to suit your design. The Lead card could be inserted at a specific location, for example.

Then, the game resumes.

This SRD will not have been available without all the players who've made feedback on After the Accident.

Thanks also to Matt Sanders and Chris Bissette. The Wretched & Alone SRD was determinant in delivering this LEADS SRD.

Get this SRD and 38 more for $25.00 USD
Games You Can MAKE
View bundle
Download NowName your own price 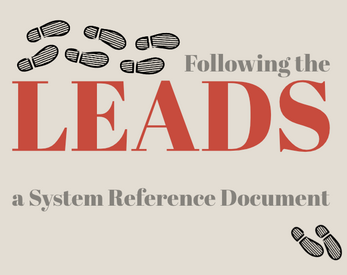